The Athletics Hall of Fame honors women in our Stuart community who have made a significant achievement in their sport and who exemplify the principles of sportsmanship and those in the goals and criteria of Sacred Heart Schools.

It was not only the outcome of the season that earned the 1980 team its place in the Stuart Athletics Hall of Fame. It is also the fact that Stuart was able to handle the pressure of their status as defending champions, stringing together a season undefeated in league competition with every other school out to bring them down. In fact there was only one team the entire year that found a way to beat Stuart.

Seeded first in the NJ Prep Tournament, Stuart defeated Wardlaw Hartridge and Newark Academy on their way to facing the Great Road rivals, PDS in the final championship game. After leading by one at half time, PDS took the lead in the second half before regulation ended with the teams tied. It only took two minutes in overtime for the Stuart Lacrosse team to break a 7-7 tie with PDS to earn the 1980 NJ State Prep crown. Gabby DiBianco, Barb Van Horn, and Mary Beth Hughes each scored two goals in the win, with additional goals by Jenny Powers and Cathy Northup; Val Van Horn finished the game with 19 saves in goal.

Kathryn Kitts was a competitive, multi-sport student-athlete representing Stuart for all of Middle and Upper School and a 4-year letter winner in Basketball and Tennis. While she excelled in both sports, she went on to compete for four years in Division 1 tennis at San Diego State University, a top-25 ranked team, where she was an SDSU Student Athlete & Mountain West Scholar Athlete all four years, the recipient of the James J. Malik award (presented to the student athlete with the highest GPA), and an NCAA Athletic Advisory Committee Member; all representative of her academic excellence, graduating Magna Cum Laude and with membership in the National Honor Society.

Kathryn was a leader on both Stuart’s tennis and basketball courts, captaining the teams in 2005 and 2006.  Among her many honors and accolades, Kathryn was elected to the Prep B First Team for both sports in all four years, and she received Stuart’s James J. Hughes, Jr. award and Carrol Florkiewicz award. She was a top 50 nationally ranked tennis player, top-four (singles) and top-six (doubles) in Middle States rankings, was the 2002, 2003, 2004, and 2005 Prep B Tennis Champion (with team championships in 2004 and 2005), and was the first Stuart basketball player to score 1000 career points, averaging 21 ppg in her senior season).

Kathryn demonstrated leadership. According to tennis coach Dede Webster, in this quote from The Town Topics in 2005. "When you have someone like Kathryn at the top, it rubs off on the others. She has a work ethic that pulls the whole team up. She was a co-captain this year and she makes it her business to be part of the team. You don't always see that from a top player." And from basketball coach Tony Bowman: "She always hustles. She doesn't play any differently whether we are up by 20 or down by 20. She will yell for the ball when we are struggling. We need more players to be like that."

Among the lessons learned through participation in sports, Kathryn cites adaptability, flexibility, competitive drive, openness to opportunity, and the impact of teamwork. She credits Stuart for giving her the self confidence to recognize opportunity and apply leadership in service, something Kathryn has chosen in her career (the U.S. Government) and of which she is most proud: her accomplishments in service to the country.

Mary earned 11 varsity letters at Stuart in field hockey, ice hockey, and lacrosse, captaining each of those teams in her senior year. Mary was an integral part of the Stuart teams which clinched multiple Prep B championships in lacrosse and field hockey. She was also the recipient of all-area and all-state honors in both field hockey and lacrosse in her junior and senior years. Mary was honored at Stuart for her athleticism, sportsmanship, and teamwork as the recipient of the James J. Hughes, Jr. Outstanding Athlete Award in 1989 and the Senior Sportsmanship Award in 1990. Mary was also awarded the NJSIAA Scholar-Athlete Award in 1990. Mary continued her athletic career as a two-sport athlete in field hockey and lacrosse at Princeton University, competing all four years for the Ivy League Field Hockey Champions and two years for lacrosse.

Kristy was a three-sport athlete at Stuart in field hockey, ice hockey, and lacrosse. Throughout her career, she was a member of the 1993, ‘94, & ‘95 Prep-B State Championship Field Hockey teams and the 1995 Mercer County Field Hockey Championship team, and served as captain during her senior field hockey season. Kristy was selected as the recipient of the James J. Hughes, Jr. Outstanding Athlete Award in 1996, recognizing her athleticism & sportsmanship. Kristy received all-area and all-state honors for field hockey in her junior and senior years, and tied for the second highest scorer in the county in 1995. Kristy also took over Stuart’s field hockey career scoring record at the time. Kristy continued her field hockey career at Gettysburg College, receiving All-American and Conference Player of the Year honors in her senior year.

Lauren Morford ’03 was a two-time Mercer County Swimming championship finalist while in high school at Stuart, before our school had a swim team. She was a four-year varsity swimmer at Columbia University where she was team MVP in 2004 and 2007 and captain senior year. Lauren was the 2004 Ivy League champion in the 1000-yard freestyle, a nine-time Ivy League finalist, and the 2006 recipient of the Tina Steck Award for having the greatest impact both in and out of the pool. Lauren swam in the 2008 and 2012 Olympic Trials and the 2009 and 2011 U.S. World Championship Trials for the 400-meter and 800-meter freestyle. 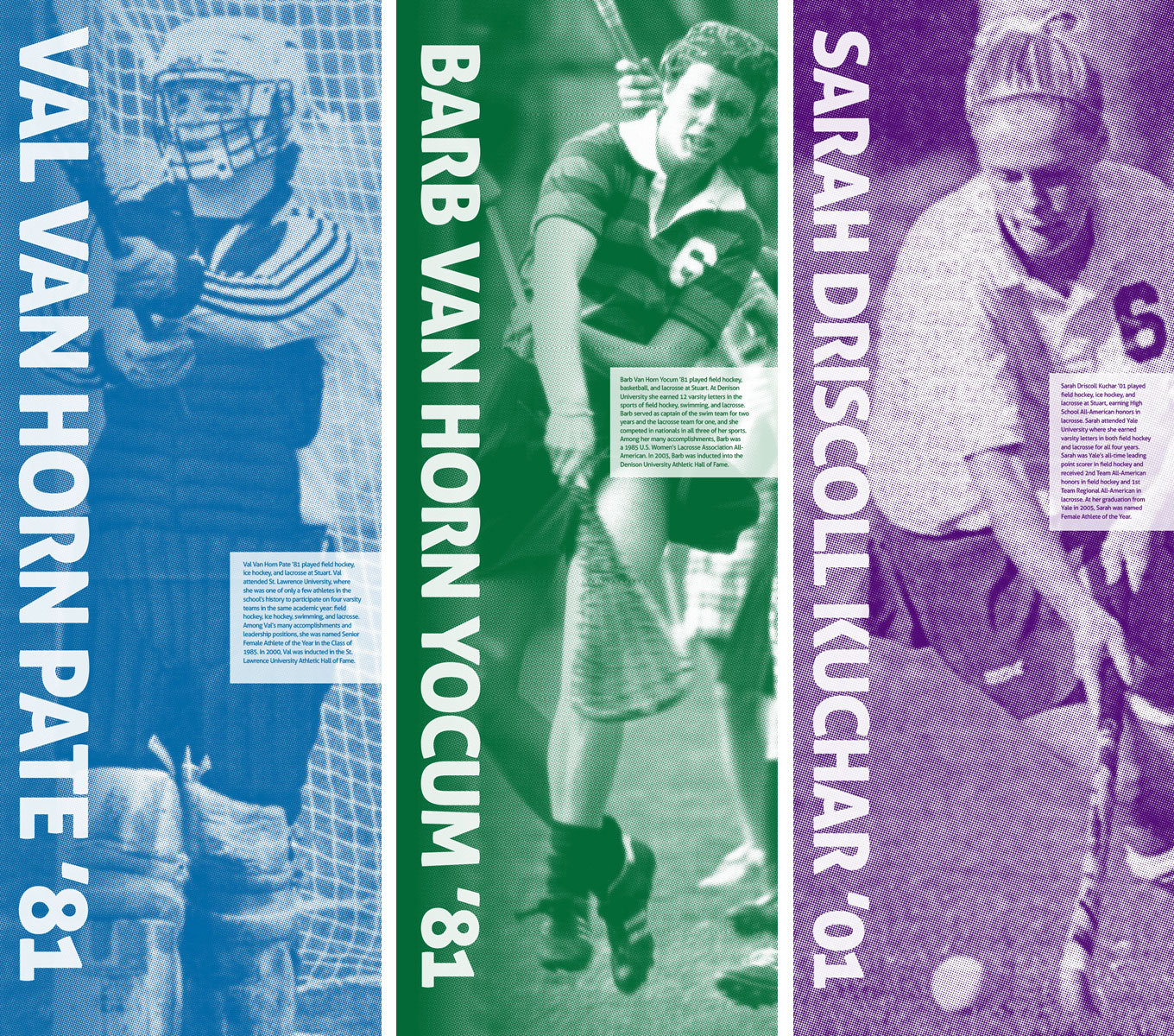 Val participated in field hockey, ice hockey, and lacrosse while at Stuart. After graduating, Val attended St. Lawrence University, where she was one of only a few athletes in the school's history to participate on four varsity teams in the same academic year: field hockey, ice hockey, swimming, and lacrosse. Among her many accomplishments and leadership positions, Val was named Senior Female Athlete of the Year in the class of 1985, and was inducted in the St. Lawrence University Athletic Hall of Fame in 2000.

Barb participated in field hockey, basketball, and lacrosse while at Stuart. At Denison University she earned 12 varsity letters in the sports of field hockey, swimming, and lacrosse. Barb served as captain of the swim team for two years and the lacrosse team for one, and she competed in nationals in all three of her sports. Among her many accomplishments, Barb was named an All-American in Lacrosse. Barb was inducted into the Denison University Athletic Hall of Fame in 2003. 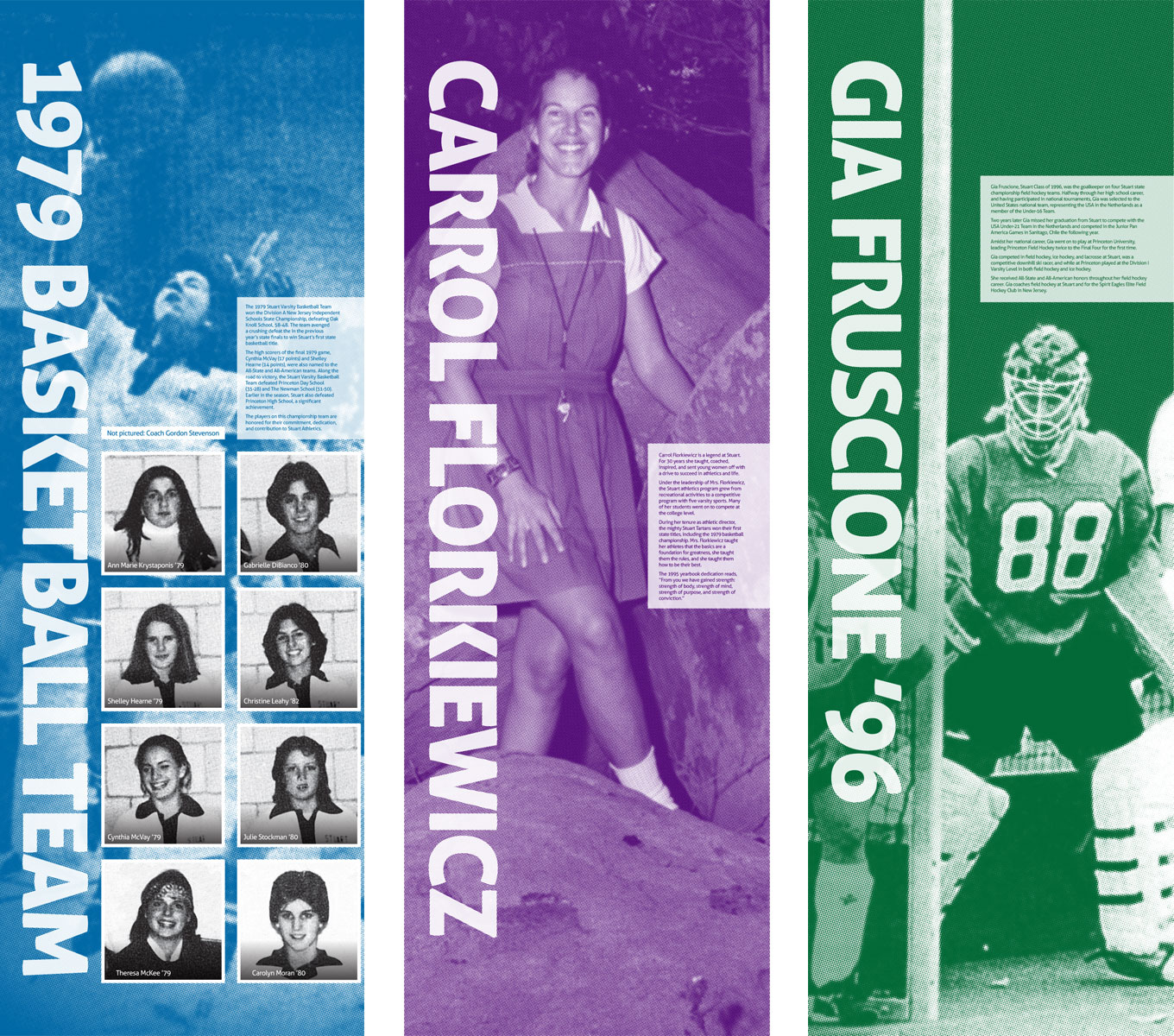 The players on this championship team are honored for their commitment, dedication, and contribution to Stuart Athletics.

Carrol Florkiewicz is a legend at Stuart. For 30 years she taught, coached, inspired, and sent young women off with a drive to succeed in athletics and life.

Under the leadership of Mrs. Florkiewicz, the Stuart athletics program grew from recreational activities to a competitive program with five varsity sports. Many of her students went on to compete at the college level.

During her tenure as athletic director, the mighty Stuart Tartans won their first state titles, including the 1979 basketball championship. Mrs. Florkiewicz taught her athletes that the basics are a foundation for greatness, she taught them the rules, and she taught them how to be their best.

Gia Fruscione-Loizides ’96 was the goalkeeper on four Stuart state championship field hockey teams. Halfway through her high school career, and having participated in national tournaments, Gia was selected to the United States national team, representing the USA in the Netherlands as a member of the Under-16 Team.

Two years later Gia missed her graduation from Stuart to compete with the USA Under-21 Team in the Netherlands and competed in the Junior Pan American Games in Sanitago, Chile the following year.

Amidst her national career, Gia went on to play at Princeton University, leading Princeton Field Hockey twice to the Final Four for the first time in the school’s history. Gia competed in field hockey, ice hockey, and lacrosse at Stuart, was a competitive downhill ski racer, and while at Princeton played at the Division I Varsity Level in both field hockey and ice hockey.

She received All-State and All-American honors throughout her field hockey career. Gia coaches field hockey at Stuart and for the Spirit Eagles Elite Field Hockey Club in New Jersey.

To nominate a Stuart alumna or coach, visit the Nominate Outstanding Alumnae page.